THE BUFF® EPIC TRAIL: PURE ENTERTAINMENT ON THE FIRST DAY 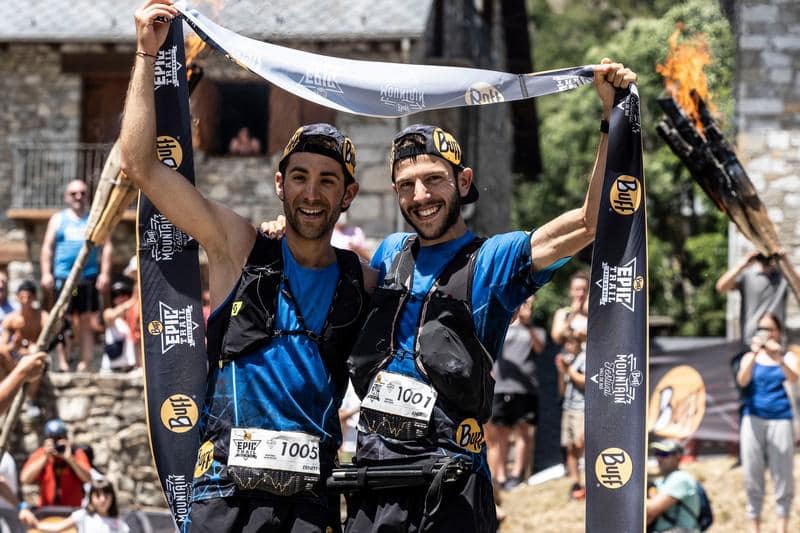 Vall de Boí. It’s six a.m. on 13 July in the town of Barruera, the nerve centre of the BUFF® Mountain Festival, and the sun is about to invigorate the moment so many runners have been waiting for. The countdown sounds and 350 runners hold their breath, their faces a picture of concentration and, above all, respect. 68 kilometres and 5,000 metres of elevation gain – the most extreme distance of the BUFF® Epic Trail – await them on the Joan Rojas Memorial, the opening event of the trail running competition at the pioneering mountain festival.

“We ran practically the entire race together. If we had done a sprint finish, there would have been only a second’s difference. We thought it would be nicer for us and for the spectators to cross the finish line together. After all, we’re friends and teammates”, said Ernest Ausiró shortly after crossing the finish line embracing his BUFF Pro Team teammate Andreu Simon with a final time of 08:41:04. Third place went to the Czech runner Jakub Uherek with a time of 09:24:38. The attitude of Simon and Ausiró demonstrates once again how trail running is a sport with different values. The mountain comes before them, and so it shall be for a very long time.

The struggle between them was nevertheless spectacular and, as befits the name of the event, now in its sixth edition, epic. The sun was scorching and the high temperatures made it all the more tough. First spot was clinched by Elisabeth Ríos with a time of 11:53:06, followed by Aida Pérez and Belinda Ortiz. They all crossed the finish line exhausted, but what they experienced in the outlying area of the Aigüestortes i Estany de Sant Maurici National Park, in the mountains of Vall de Boí, is something they will never forget.

The same goes for the 1,000 runners who took park in the BUFF® Epic Trail 26K by SCOTT with 1,800 meters of elevation gain, also starting from Barruera, as part of the Skyrunner® National Series.

In the women’s race, the Salomon runner Eli Gordon appeared pensive at the start – she had a tough start to the season due to various injuries, although she showed some signs of improvement a couple of weeks ago at the Marathon du Mont-Blanc. Today she was proclaimed the winner of the race with a time of 03:16:50, having dominated from start to finish. She was joined on the podium by Poland’s Martyna Kantor (03:37:10) and France’s Laurence Santanac (03:39:49), demonstrating the strong international character of the BUFF® Epic Trail.

Meanwhile, the men’s race was not decided until the last few kilometres with Borja Zubizarreta crossing the finish line with a time of 02:52:17 to take first place, whilst second place went to Rubén Hernández (02:54:14) and third place to the BUFF®-SCOTT MTB Team runner Pau Zamora. In spite of the technical nature of the route – the type in which passions run particularly high – the race had a particularly fast pace.

The day’s events have undoubtedly been a spectacular prelude to what awaits us tomorrow with the Supersky Race (double points), part of theMigu Run Skyrunner® World Series. Across42 kilometres, with 2,800 metres of elevation gain, the best mountain runners in the world, both in the female and male categories, will fight with all their might to win a victory that is truly coveted. Although rain is expected, nothing will be able to tarnish one of the races of the year – pure entertainment in action.